Sometimes life gets a bit busy and you just need a good (bad) movie to settle your spirits. The kind of movie that’s cohesive in its stupidity, that laughs at how seriously it takes itself, that stands steadfast in the face of its own inadequacies. Zoombies, dear reader, is sadly not that movie.

This is The Asylum’s answer to Jurassic World in a very loose sense (in that it references Jurassic World and has a park filled with lots of animals), and one would think that that kind of ripoff combined with zombified animals would result in a fantastic hour and a half, but it doesn’t. Something’s gone horribly awry at The Asylum of late where they just can’t seem to pull off making a good bad movie, despite having all of the ideas and none of the budget necessary to make such things happen. 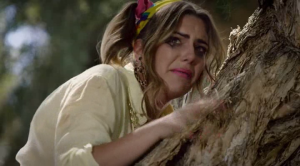 Anyone who wears a side scrunchie in this day and age is just asking for trouble.

Welcome to Eden, the largest and most spectacular wildlife park on Earth! Home to every kind of creature imaginable, Eden is the last refuge for many species on the planet, and will soon open its illustrious gates to the public so that all can admire Mother Nature’s glorious bounty.

That’s what Dr Ellen Rogers is hoping for anyway. Having inherited the park from her grandfather she’s quickly come to realise that it’s rather pricey to maintain a place that has fully thriving replicas of every ecosystem on the planet (because it’s not that difficult to build an artificial savanna next to an artificial polar region), so she’s getting ready for the grand opening where thousands upon thousands of children can get up close and personal with nature with their grubby, sticky little fingers. Of course, such grand openings are never without a few teething problems…

The teething problem being a virus that started out in a monkey enclosure and is rapidly spreading across the entire park. The virus kills its host and then re-animates them, turning once adorable koalas and majestic giraffes into salivating, blood-thirsty predators. It’s up to Dr Rogers and her team of useless interns, inept security guards, and untrained scientists to try and isolate the virus and discover a cure before it can reach Eden’s aviary and infect the birds, who will surely spread the disease across the world.

Doctor, his test has come back positive for death.

The visuals in this movie are quite astounding, because when you start watching everything’s quite good. I was sitting there thinking that The Asylum had really upped their graphics budget and updated their PCs to run on at least Windows 98, so it was all rather promising. Sadly that promise quickly evaporated as the animals became more and more blurry and poorly animated as time wore on.

Now I understand that it must be difficult, as an actor, to react to creatures that will only be added in in post-production, but even this isn’t enough of an excuse to subject an audience to some of the things that I had to see. I do not believe, for instance, that you can simply bandage up a leg and walk off an injury that was caused by an elephant standing on you. I similarly do not believe that if you were violently thrown from a car that rammed into a tree at full speed that you would walk away with nothing but one or two grass stains on your pants. I’m no zoologist but I also do not believe that a giraffe has the kind of teeth that it would need to viciously gore and mutilate a human as this movie would have you believe.

These are just my opinions as a movie watcher and a specialist in absolutely nothing, but I feel that they are important nonetheless.

Zombified zoo animals. Just ponder that for a moment – let it roll around in your mind and conjure up spectacular images of horror and madness. That’s what Zoombies should’ve been, but wasn’t.

I was really excited when I heard this movie was coming out, but watching it what struck me the most was just how amateurish it was (even by the low standards set by The Asylum). Most of all it committed the one cardinal sin for movies in this genre – it wasn’t funny. If you don’t have the money to make it serious then you have to camp it right the way up until the audience member’s brain is so assaulted by what’s on the screen that they have no choice but to enjoy it. That never happens, and what you’re left with is 90-or-so minutes of “actors” plodding along desperately trying to find their way to some kind of plot.